If you’re worried about ice dams forming on your home this winter, you might be wondering if icicles are an indicator.

With the frigid winter temperatures we get here in Wisconsin, you’ve probably thought about the effects of the cold on your home. You probably know that snow, warmed by air escaping from your attic, can melt and slide down your roof only to refreeze once it reaches the eaves, where it forms an ice dam. Do you know, though, icicles can be a sign that a danger to your house is forming?

Ice dams pose a hazard for a few reasons. First, they form a barrier on the edge of your roof, keeping snow there. Enough snow buildup can put a significant burden on your roof – and roofs have even been known to collapse under the weight! Secondly, the snow ice dams trap on your roof could melt in the sun and leak into your home, causing water damage.

Obviously, it’s important to get rid of ice dams before they can do serious damage. Icicles could be a sign that such a dam has formed, but icy fingers off your roof don’t always mean you’ve got an ice dam.

Icicles need snow, heat to melt that snow, and then cold weather to form. They don’t always form because you have an ice dam, but those are the same three things that ice dams need to form. In other words, if conditions are ripe for icicles, they’re ripe for ice dams, too! You’ve been warned!

You take steps to protect your home against damage, and that’s why you care about things like ice dams. That doesn’t mean that you can entirely avoid an accident, though. To make sure you have the homeowners insurance you need to be protected through Wisconsin’s winter and during the rest of the year, contact American Advantage – IFS Inc. in Pewaukee today. 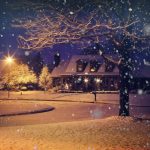 How Does Insurance Coverage Work When Driving For Uber, Lyft or Food Delivery?Auto Insurance, Blog News